THE RANKS of jobless Filipinos increased in February, a month before the government tightened lockdown restrictions in Metro Manila and nearby provinces due to a surge in coronavirus disease 2019 (COVID-19) cases, according to the latest data on jobs.

Preliminary results of the Philippine Statistics Authority’s (PSA) February 2021 round of the Labor Force Survey (LFS) released on Tuesday showed there were about 4.187 million unemployed Filipinos. This was more than the 3.953 million recorded in the January round. 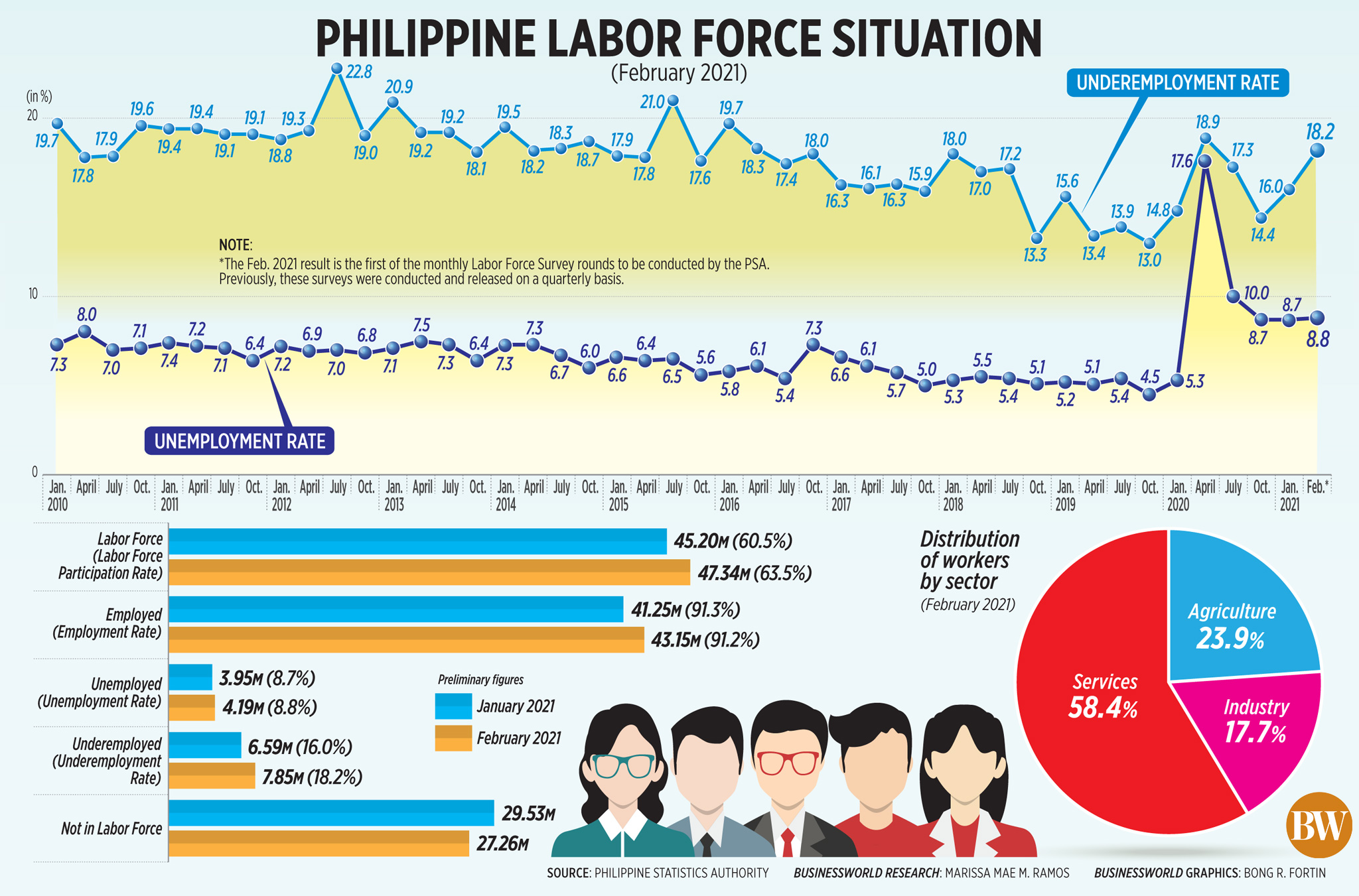 The February survey round marked the first of the monthly surveys to be conducted by the PSA to closely monitor the current job situation in the country amid the pandemic. In previous years, the surveys were conducted and released quarterly.

“This means we have surpassed our pre-pandemic employment level of 42.6 million in January 2020,” the economic managers said.

In absolute terms, there were 1.6 million jobs restored in services, followed by 259,000 in agriculture and 46,000 in industry. The economic managers said this trend “signals rising economic activity.”

“Around 8.7 million jobs were lost when we imposed the strictest quarantine from March to May 2020. As we carefully relaxed our restrictions, more jobs were gradually restored and the total number of jobs created since April last year at 9.3 million led to employment exceeding pre-COVID levels in February 2021,” they said.

Working hours averaged 38.9 a week, fewer than the average of 39.3 in January.

“Even as the economy has been said to be reopening [at the beginning of 2021], these February employment numbers are seemingly telling a different story,” UnionBank of the Philippines, Inc. Chief Economist Ruben Carlo O. Asuncion said in an e-mail.

“Reopening should mean the return of jobs, but instead, unemployment has risen including underemployment,” he said. “This may mean that more firms are probably shedding off jobs or are closing down resulting in direct unemployed people or people employed in ‘part-time’ jobs. These part-time jobs may mean that people work fewer hours or full-time jobs but have lower pay due to the pandemic challenges,” he added.

In a separate e-mail, ING Bank N.V. Manila Branch Senior Economist Nicholas Antonio T. Mapa said regardless of the level of lockdown, economic activity and the job market would remain subdued and challenged “given the substantial loss of momentum in the economy.”

“The overall negative sentiment has caused households to cut back on spending to just the bare necessities and perhaps modest discretionary spending, limiting economic activity,” he said. “Meanwhile, with firms pressured by the downturn, not too many are in expansion mode, limiting job opportunities available for job seekers,” Mr. Mapa said.

“We are well past the stage that lockdowns are causing hunger and unemployment, the economy is stuck in low gear,” he added.

Asked on the prospects of jobs data going back to pre-pandemic levels, both economists were not so upbeat.

“Until we see the economy charging again at its former breakneck speed, we will predict that unemployment will remain above its medium-term average of 5.3{7cf23ffd9f893b42e5168467dbdff3dd8c8539e14232c919813e000f7f93ca07}. Unless the economy is expanding fast enough to absorb the slack in labor, jobs for Filipinos will be few and far between,” Mr. Mapa said.

UnionBank’s Mr. Asuncion said unemployment and labor force participation “may worsen” due to the challenges posed by the ongoing pandemic.

“We are expecting recovery (normalization) of jobs set back further because of the re-imposition of restrictions lately. The initial expectation was to return to pre-pandemic GDP (gross domestic product) level by [the second half of 2022], thus, this may be moved farther to the end of 2022,” Mr. Asuncion said.

“Any form of people movement restriction can undermine jobs recovery, and we continue to hold the view that the quick and effective rollout of COVID-19 vaccines is a main driver of economic recovery and consumption and investment confidence,” he added.

This year was seen to be a period of economic recovery as the government gradually reopens sectors of the economy. Recent developments, however, put a damper on this outlook.

The government has placed Metro Manila and the provinces of Bulacan, Rizal, Cavite, and Laguna under enhanced community quarantine, the strictest lockdown level, for two weeks until April 4 due to a surge in COVID-19 infections.