Bitcoin falls to a two-week low after China announced it had summoned bank chiefs to reiterate the ban on providing cryptocurrency services.

Bitcoin fell to a two-week low amid an intensifying cryptocurrency crackdown in China.

China announced on Monday that it summoned officials from its biggest banks to a meeting to reiterate a ban on providing cryptocurrency services. It’s the latest sign that China plan to do whatever it takes to close any loopholes left in crypto trading.

Representatives from Industrial and Commercial Bank of China Ltd., Agricultural Bank of China Ltd. and payment service provider Alipay were reminded of rules that prohibit Chinese banks from engaging in crypto-related transactions, according to a statement from the central bank on Monday.

“The PBOC crackdown is going further than initially expected,” said Jonathan Cheesman, head of over-the-counter and institutional sales at crypto derivatives exchange FTX. “Mining was phase one and speculation is phase two.”

Separately, a Chinese city with abundant hydropower has stepped up action to rein in mining. A Ya’an government official told at least one Bitcoin miner that the city has promised to root out all Bitcoin and Ether mining operations with a year, said a person with knowledge of the situation. 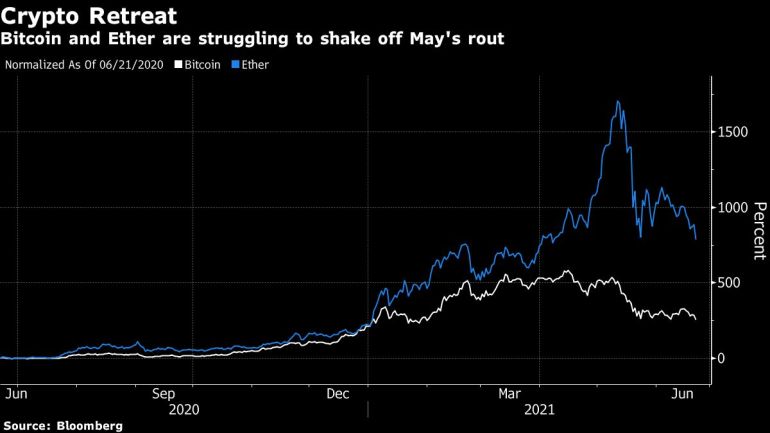 In the backdrop, the appetite for risk assets has diminished after last week’s hawkish policy pivot by the Federal Reserve. Even though equity markets tipped into the green on Monday, analysts pointed to lingering jitters about frothy corners of the market.

–With assistance from Li Liu.