By Ana Olivia A. Tirona, Researcher

INFLATION eased in March after five straight months of acceleration, as food prices increased at a slower pace, the government’s statistical agency reported on Tuesday. 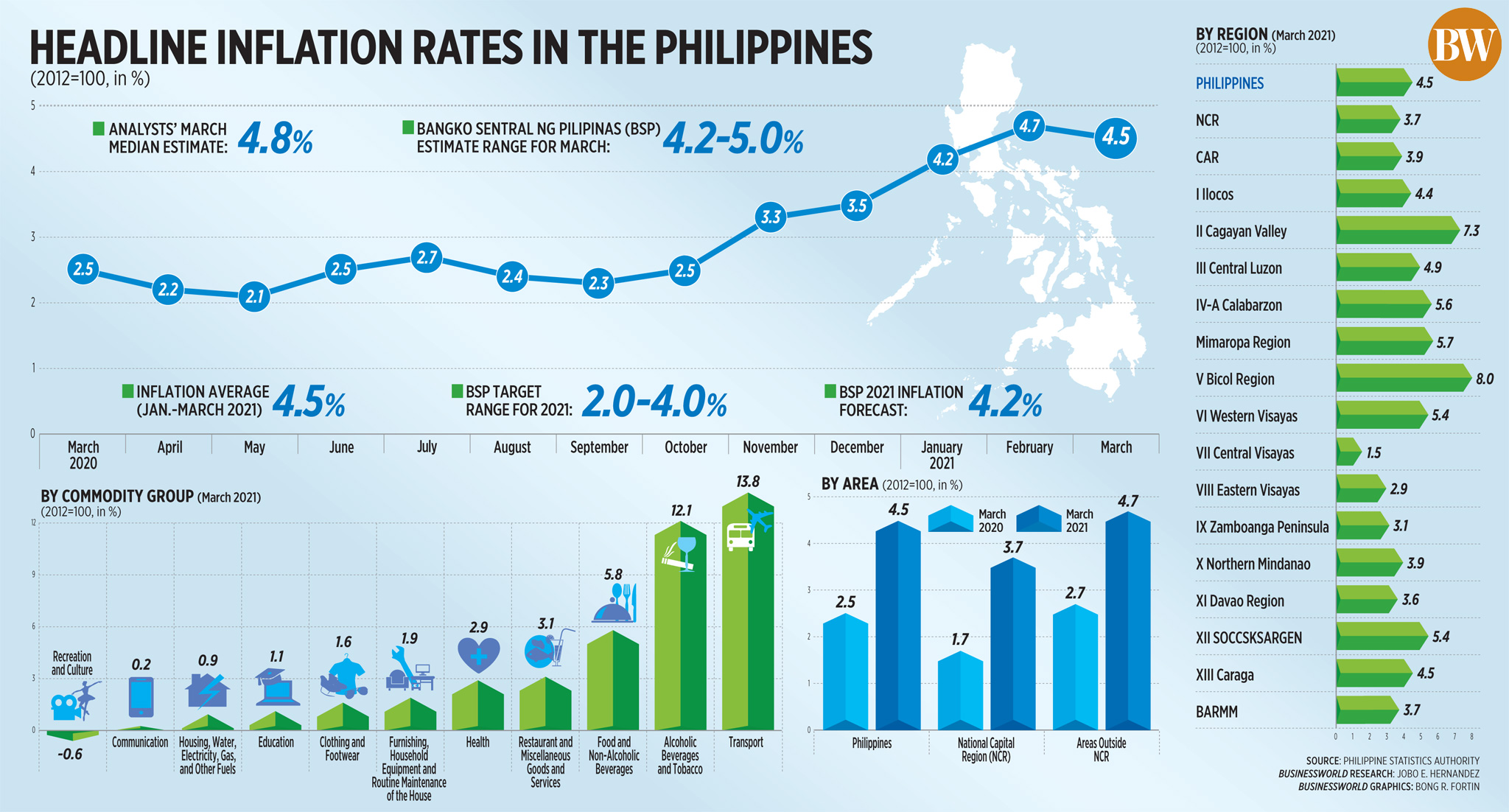 “The overall latest outturn is consistent with expectations that inflation could settle above the high end of the target in 2021, reflecting the impact of supply-side constraints on domestic prices of key food commodities, such as meat, as well as the continuing rise in world oil prices,” BSP Governor Benjamin E. Diokno said in Viber message to reporters.

“Nevertheless, inflation is still seen to return to within the target band in 2022 as supply-side influences subside,” he added.

In a separate statement, the National Economic and Development Authority said the lower inflation rate in March “is a good indicator of price stabilization” and expects succeeding inflation rates to “align with targets soon as a result of proactive interventions.”

“At the same time, the Monetary Board emphasizes that the timely implementation of non-monetary interventions is crucial in mitigating the impact of supply-side pressures on inflation and thereby preventing them from spilling over as second-round effects,” he said, adding that the central bank is “prepared to take immediate measures as appropriate.”

Economists see the central bank to keep rates on hold in the next monetary policy meeting to be held on May 13.

“BSP will only consider recalibrating monetary policy should second-round effects such as wage hikes become apparent or if inflation expectations become disanchored,” he added.

In a separate statement, ANZ Research economists Rini Sen and Sanjay Mathur said a long pause in rates is “warranted” at this point as they believe the BSP will continue to monitor inflation figures despite prolonged elevated prices in food items due to extended lockdowns.

Metro Manila and the provinces of Bulacan, Cavite, Laguna, and Rizal will remain under “extended community quarantine” until April 11.

Security Bank Corp. Chief Economist Robert Dan J. Roces shared the same assessment: “[A]s much as the elevated inflation path could make the BSP uneasy, we believe the central bank will prioritize supporting the economic recovery and therefore rate hikes at this point will be counter-productive,” he said in a Viber message to BusinessWorld.

“An outright double-dip in quarter-on-quarter gross domestic product still is on the cards, with the recent extension of anti-virus measures in line with our below-consensus expectations,” he said.

The Department of Health reported 9,373 new COVID-19 cases on Tuesday, bringing the total number of cases to 812,760 and active cases to 152,562. — with inputs from Beatrice M. Laforga and Luz Wendy T. Noble